Johanna Granlund and Amanda Wennberg, BFA students from the Academy of Art’s School of Advertising, have been chosen as finalists for Kia’s print ad contest. The coveted grand prize: a trip to the 2019 Cannes Festival in Paris, $10,000 cash prize for tuition, and another $5,000 for their advertising school program.

Needless to say, the stakes are high.

The contest centers on Kia’s new, flashy red sports car, the Stinger. According to Granlund, the brief required the entries to bring in “creativity, youthfulness, and speed and all of that into the brand ad.” The ad should also be able to change the image of Kia as being a strict “A-to-B car.”

To get the brief right, the duo dived into research and found that the primary buyers of the brand were people ranging from 35 to 55 years old. However, they wanted to focus not merely on the age of the demographic, but rather, their mindset.

The kind of people they think this car should appeal to are those who “go against the stream but stay on top of trends.” These could include those going through mid-life crisis but still would not want to be stereotypical about it. “Who we’re talking to is when you’re after your family but you don’t buy the Porsche,” explained Wennberg. “Because you’re not that kind of person, you don’t want to be a cliché. And so the Kia is kind of the perfect solution.”

They then set out to fulfill their creative vision once they have identified their ideal consumer for the product. They laid out a narrative that sets up the mindset why this particular middle-aged demographic would go for a car like the Stinger. All the way back.

Setting the Mind for the Goal 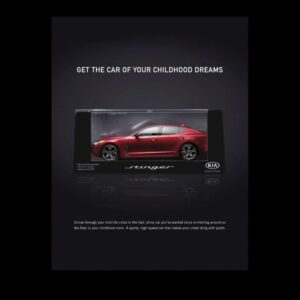 “When you’re young, you’re playing around with the toy car and then you get your first s— teenage car, the one your parents buy you. Then after that, as an adult, you have a little bit more money to splurge on a nicer car. But when you get a family you have to give that up,” said Wennberg. According to their ad, though, this does not necessarily have to be the case.

“Get the car of your childhood dreams,” says their copy. “Cruise through your mid-life crisis in the fast, shiny car you’ve wanted since vrooming around on the floor in your childhood room. A sporty, high-speed car that makes your chest sting with youth.”

The Stinger sits in the middle of the ad, all boxed up like a precious toy car, just waiting to be enjoyed by an excited kid.

Granlund and Wennberg’s entry, which will most certainly make for a good addition to their creative portfolio in advertising school, competes with five other submissions for the Kia Driving Creativity Contest. The winner will be announced in the first week of December.

Cast your vote online by December 3rd to make it count.