Ajomale: 100m & 200m
Mobolade Ajomale (School of Communications & Media Technologies, BFA) backed up his dominant performance in the 100-meter preliminaries with an even more impressive finale. The sophomore fought off a challenger down the stretch to capture his first outdoor title, posting a new program record of 10.17 seconds in the process.

It made for Ajomale’s fourth individual championship in his career across indoor and outdoor seasons with the Academy. His first honor was for the indoor 60m as a freshman in 2016. The Richmond Hill, Ontario, native added consecutive 60m and 200m indoor titles in 2017.

After sustaining an injury in the 100m race, Ajomale attempted to run the 200m. Unfortunately, his injury was too severe and, after pulling up just after the curve, he was forced to walk gingerly across the line. By finishing the event, however, he earned another All-American honor, the ninth in his career and the fourth in his sophomore season. 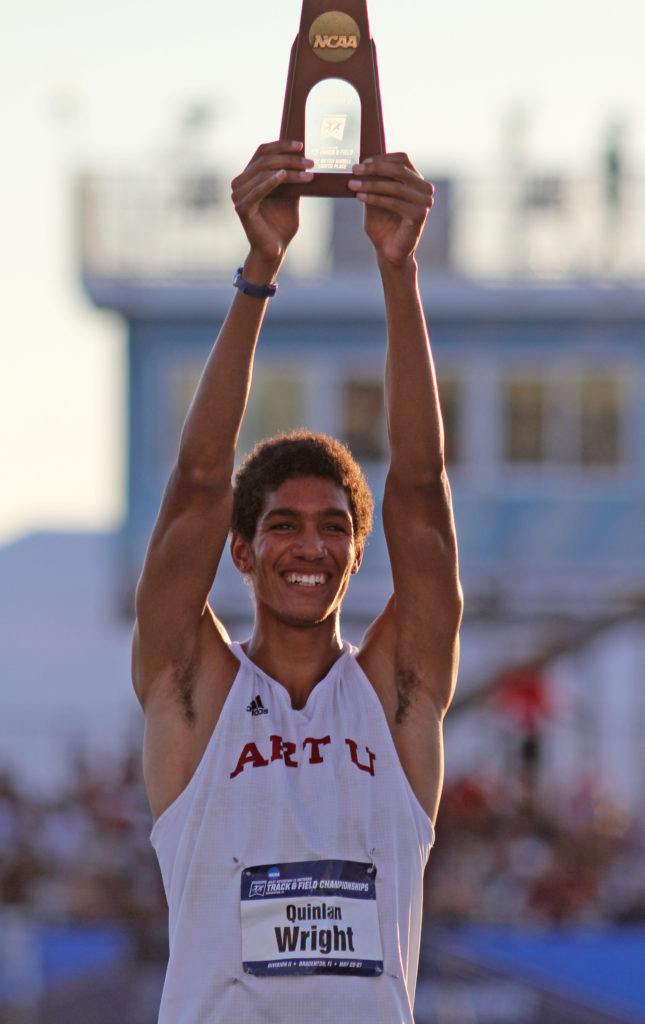 Wright: 400m Hurdles
In the men’s 400m hurdles, Quinlan Wright (Communications & Media Technologies, BA) closed out his collegiate career with his first-ever All-American honor. He scored one point for Academy of Art with his eighth-place finish with a 52.37-second mark.

Hensley: Heptathlon
Day one: May 25 saw Hannah Hensley (Interior Architecture & Design, BFA) put together a four-event score of 3092 for sixth place among 15 entrants. Her biggest highlight was winning the high jump after clearing 5′ 10″ (1.78m) to match her personal best…as well as the program record. Only Hensley and Alaska Anchorage’s Karolin Anders topped the bar at 5′ 8.75″ (1.75m), and Hensley went on to confidently clear the next height for what would be the best mark of the day.

She had opened the first portion of the heptathlon with 14.64 seconds in the 100m hurdles, taking 11th place before her high jump talents moved her up to second place. A personal best in the shot put 28′ 8.25″ (8.74m) made her seventh before the day ended with her finish of 25.95 seconds in the 200m race, which put her in sixth place.

Then, amid weather in the high 80s with nearly 80 percent humidity, Hensley endured a grueling 800m race, finishing ninth at 2:25.16 seconds. After the final point totals were settled, Hensley claimed seventh overall with a new personal record 5134 points…32 points shy of the program record that made Jesseka Raymond the first Academy All-American in the heptathlon in 2013.

Graham, Presigny, Scott, Grace: 4 x 400m Relay
The last event in the championships that Academy athletes contested was the women’s 4 x 400m, which saw the Urban Knights in sixth place at 800m. Though they would move up to fifth after the second handoff, strong anchor legs from the leading teams made it a 0.40 difference between sixth and seventh, where the Urban Knights landed at the race’s finish. Nevertheless, the foursome—comprised of Schae Graham (Fashion, BFA), Marion Presigny (Fashion, MA), Mistic Scott (Motion Pictures & Television, BFA) and Jasmine Grace (Fashion, BFA)—hoisted trophies for the second consecutive season.